"My C drive runs out of space and only 500MB free space remaining, I've tried partition magic, but it cannot be installed on server, does anyone know other partition magic for windows server 2003?"

Partition Magic is one of the most popular and famous software to resize partition. In 2003, it has transferred its ownership from PowerQuest Corporation to Symantec. On October 13, 2011, the Symantec website states, "Sorry, we no longer offer Norton Partition Magic".

PartitionMagic is compatible with Windows NT, 95/98, ME, 2000, and XP desktop editions, since Symantec purchased the application in 2003, there has not been a new update release, if your Operation System is Windows Server 2000/2003/2008, Partition Magic is unavailable for Windows Server to manage disk partitions. 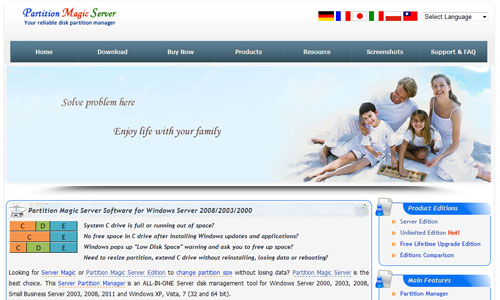 Partition Magic ® is a registered trademark of Symantec Corporation.